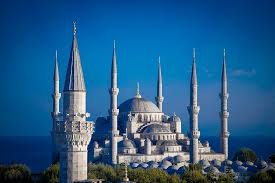 Nowadays Turkish body language doesn’t differ from ours in a significant way. However, in the countryside, you may meet some misapprehension. The most special and different sign of Turkish body language for us would be rising the chin up, rising eyebrows and clicking the tong (all this at a time), which would mean simply “no.” Try to practice this body sign and amuse yourself and others. Also, remember that shaking your head means “do not understand.”

Don’t be surprised seeing men who kiss cheeks of one another. And also don’t be shocked if a Turk is kissing your cheek. This is just a regular way of polite and friendly manners, and no way is it a token of homosexuality or twisted interest, as well as two men holding hands, are not 100% homosexuals. Nowadays Turks greet each other and say good-bye with handshakes and more likely with kissing cheeks. This concerns two women, two men and a man and a woman too.

It is known to everybody that in Germany blowing your nose in public is completely ok, but coming to Turkey Germans should forget their native habits. Don’t blow your nose aloud and don’t burb blatantly. Also, do not point your foot at a person; this is rude as well as pointing a finger. And just in case another rude gesture you have to avoid while in Turkey. The trick is that English-speaking world uses it as a sign of “ok” or “cool.” It is when you unite a forefinger and a thumb, forming a circle, leaving other fingers loose. This body-language sign means homosexual in Turkey and is considered rude, especially pointed towards a man.

Certainty politics would be a heavy topic in many countries, especially if vexed questions are discussed. You never know what opinion or what principles a man beside you has. So a win-win situation would be to speak about achievements of Ataturk, a beauty of Turkish nature, people’s hospitality and maybe Turkish great historical heritage – all these things are true and you wouldn’t have to go hot and cold in case you raise a tricky theme.

Hospitality is one of the oldest Turkish traditions and national features. So if during a walk in a small Turkish village you were suddenly invited for tea, don’t take it personally, just be thankful, try to say a few words in Turkish and maybe try to express your love to the country, its bonds, and people. Inviting strangers for tea or coffee and caring for them is in native’s blood, especially if the guest is foreign.

Another traditional feature you should know is salesmanship. The profession of a tradesman is deemed to be blessed, and usually, the salesmen do their best to engage the customer even if the last one seems to be not so interested.

Refugee/Turkish Occupation: The Sardine Feast occurs during the first fortnight of July in Nea Moudania. The event commemorates the refugees from Asia Minor who resettled in the areas of Halkidiki.

In Galactica on the 6th and 7th of January, there is the custom of the Camel and the Bride dating back to the Turkish occupation. It is based on the abduction of a pretty girl by the village Aga who wanted to include her in his harem. The young Greek men decided to steal her back, so they made a camel in which some of them hid while the others danced around it having fun. In this manner they were allowed freely to roam the village until. Eventually, they located where the girl had been hidden and freed her.

The next day they whisked her off to wed her sweetheart. These days the ceremony starts on Epiphany, and the young people dress in traditional costumes and dance to the music of pipes and drums after which there are feasting and merriment. On the second day, there is a revival of the wedding ceremony, so it is one long round of fun and frolicking.

In the central highland region of Arnaia, they have the ‘kotsmanos.’ Under Turkish rule this was celebrated on the Wednesday after Easter. The men dressed in the local costume carrying muskets and would ride to the chapel where they would attend a service. After this they would fire their guns at a target consisting of an egg dyed red and hung from the highest tree, this was followed by feasting. This provided them with good target practice which otherwise was not allowed under the strict Turkish regime.

For a fantastic Accounting firm Des Moines, IA call on CustomOne CFO & Controllers.  They have customized solutions to fit all of your business needs.